The Tasmanian Devil cannot be mistaken for any other marsupial. Its spine-chilling screeches, black colour, and reputed bad-temper led the early European settlers to call it The Devil. Although only the size of a small dog, it can sound and look incredibly fierce but is actually one of the most misrepresented creatures on earth.

The world's largest surviving carnivorous marsupial, the Devil has a thick-set, squat build, with a relatively large, broad head and short, thick tail. The fur is mostly or wholly black, but white markings often occur on the rump and chest. Body size also varies greatly, depending on the diet and habitat. Adult males are usually larger than adult females. Large males weigh up to 12kg, and stand about 30 cm high at the shoulder.

Devils once occurred on mainland Australia but became extinct on the mainland some 400 years ago – before European settlement. Devils probably became extinct there due to increasing aridity and the spread of the dingo, which was prevented by Bass Strait from entering Tasmania. Today the Devil is a Tasmanian icon. But it hasn’t always held this status. Tasmanian devils were considered a nuisance by early European settlers and for more than a century, they were trapped and poisoned. They became very rare, seemingly headed for extinction. But the population gradually increased after they were protected by law in June 1941. Anecdotal evidence suggests that Devil numbers were quite variable over the past century, but were believed to be at historic highs about 15 years ago. They were particularly common in forest, woodland and agricultural areas of northern, eastern and central Tasmania. These numbers have dropped since the 1996 identification of Devil Facial Tumour Disease - a fatal condition in Tasmanian Devils, characterised by cancers around the mouth and head.

The Devil is mainly a scavenger and feeds on whatever is available. Powerful jaws and teeth enable it to completely devour its prey -- bones, fur and all. Devils maintain bush and farm hygiene by cleaning up carcasses. Devils are famous for their rowdy communal feeding at carcasses -- the noise and displays being used to establish dominance amongst the pack. It is nocturnal and during the day it usually hides in a den or dense bush. It roams considerable distances --up to 16 km -- along well-defined trails in search of food. It usually ambles slowly with a characteristic gait but can gallop quickly with both hind feet together. Young Devils are more agile however and can even climb trees. The famous gape or yawn of the devil that looks so threatening is performed more from fear and uncertainty than from aggression. Devils produce a strong odour when under stress, but when calm and relaxed they are not smelly. 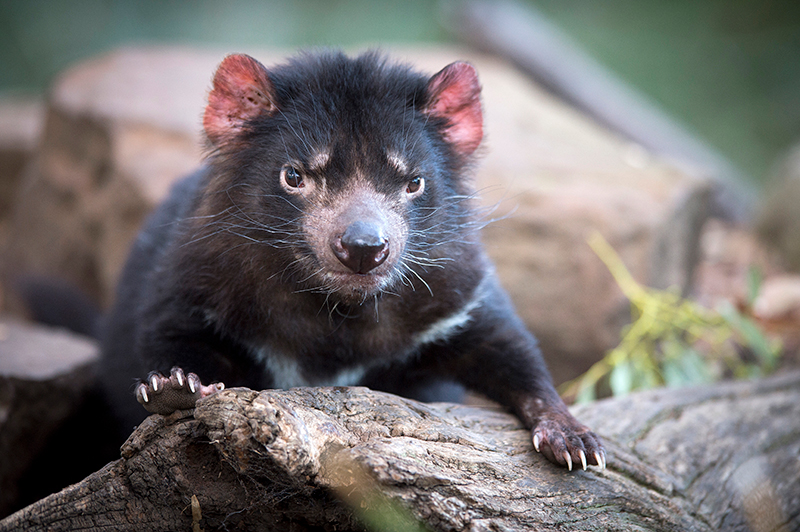 In May 2008, The Tasmanian Devil’s status was formally upgraded to ‘endangered’ under Tasmania’s Threatened Species Protection Act 1995. Tasmanian devils are wholly protected. DFTD which is now having a devastating effect on the Tasmanian Devil population was first noticed in the north-east of Tasmania in the mid-1990s but has become more prevalent in recent times in other areas of the State.