No one should visit Tasmania without taking to the air and seeing the full glory and majesty of the world’s last wilderness frontier. Take a trip in to the remote South West National Park, across to the Western Wilderness and the Gordon River, over to Maria Island or Wineglass Bay, or simply take a decadent transfer to your idyllic beach shack on North Bruny

The wilderness flight to the South West National Park is one of the most spectacular day trips it is possible to take in Tasmania.

On this never to be forgotten day trip your light aircraft will fly you into this remote area via the South West Coast. Departing Cambridge airport, you will fly down the D'Entrecasteaux Channel, past the mouth of the Huon River and on to Recherche Bay. Your aircraft will enter the South West World Heritage Area at South East Cape, Tasmania's most southern point, and head west, to Melaleuca, the only breeding place for the critically endangered Orange-bellied Parrot.

After landing at Melaleuca, you'll board a boat where you'll experience this incredible and unique wilderness from the water. You visit the Needwonnee Walk, an award winning Aboriginal interpretive experience before having refreshments and lunch. Underwater cameras will give you a close up view of this colourful and unique marine environment found nowhere else in the world. You’ll see the remote Celery Top Islands, take walks in the wilderness and breathe the cleanest air in the world. You will re-board the aircraft for the return flight to Cambridge Airport via the spectacular Eastern Arthurs and Federation Peak, down the Huon Valley and over Hobart City.

If you are short of time, you can take an aircraft from Hbart, over the picturesque central highlands of Tasmania towards the island’s wild west coast, taking in the grand scale of Macquarie Harbour before descending to Strahan to join the award-winning Gordon River Cruise.  You will board the award-winning vessel and journey through the famous waterway of the Gordon River, part of Tasmania’s UNESCO Wilderness World Heritage Area, for a six hour voyage including a stop at Sarah Island.  The ship will arrive back in Strahan with plenty of time to peruse the local gift shop and take a stroll around the beautiful township before returning by air to Cambridge Airport. 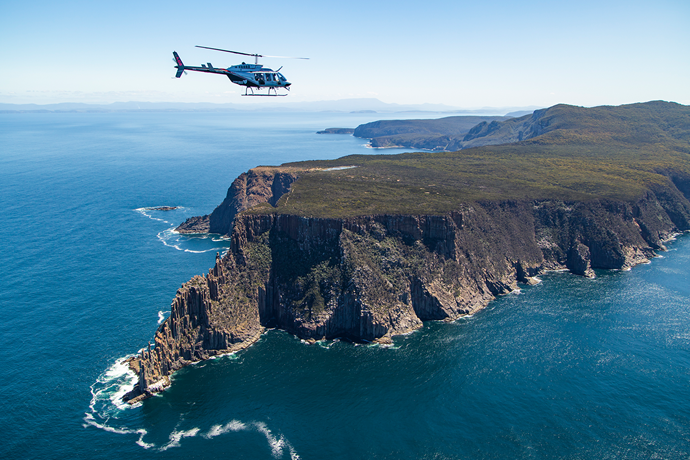 Flying into the remote area South West of Tasmania is one of the most remarkable trips you can do from Hobart, in fact probably from anywhere on earth. Read more...

Exploring this magnificent region by air is one of the only ways of getting off the beaten track, throwing off the tourists who flock here, and enjoying the full unbridled beauty of the granite rocks, turquoise seas and white sand bays. Read more...

With over 80 white sand beaches, wombats and wallabies and birds galore, this is as close to paradise as it gets. Read more...