Renowned for its beautiful white beaches, turquoise waters, lichen stained red rocks, wineries, superb walking, Mediterranean climate, and a plethora of conservation areas and national parks bursting with birds and wildlife, Tasmania's east coast is the most photographed stretch of coastline in the island.

It is easy to see why.  With long white sandy beaches washed by crystal clear blue waters and lined by the unmistakable granite rocks and cliffs stained vivid orange by lichen, Tasmania’s east coast is one a photographer's dream from sunrise to sunset. The mild dry climate, even during winter months, and pristine secluded bays make for dreamy holiday experiences by car, foot, bicycle, kayak and boat, all of which can easily be included in a tour of this delectable part of Tasmania.

Award-winning wineries line the coastline, which is known as the Great Eastern Drive with evidence of convict history along the way.

Bird and wildlife are abundant both on land and in water, with seals, albatross, sea eagles and dolphin spotted year-round. Whales are now a daily sight from May to November on their annual migration.

Like Cradle Mountain, Wineglass Bay tops the list of ‘must visit’ spots making it the first port of call, especially for walkers. Those with limited mobility can enjoy a fabulous four-hour cruise, while those with a spirit of adventure can take a guided kayak tour.  Freycinet is home to one of the Luxury Lodges of Australia and the superbly located Freycinet Lodge which attracts most of the visitors.

Those inclined to leave the tourists behind should consider making their base south or north of the Freycinet Peninsula.  The southern stretch of the Great Eastern Drive, which stretches from Orford in the South to St Helen's in the North, holds the key to the Maria Island National Park, a 'Noah's Ark' sanctuary for endangered birds and wildlife - visit it as a day trip or a four day guided walk.  North of Freycinet brings you to the little-visited Douglas-Apsley National Park and further north, the 50 km stretch of remote beaches known as the Bay of Fires which, despite its reputation, has minimal accommodation and infrastructure. 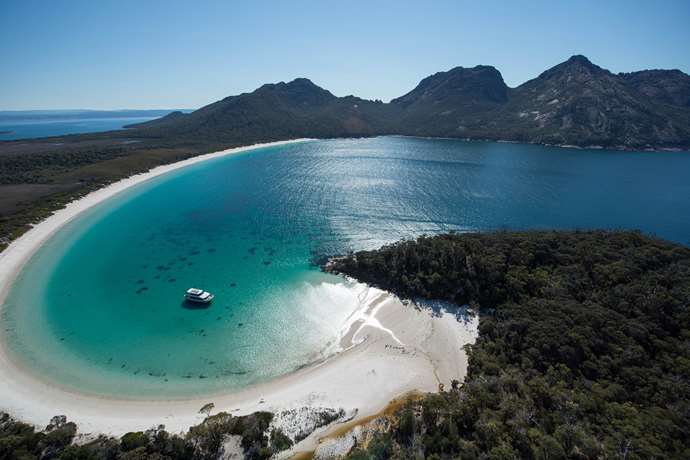 Visitors tend to head straight for the iconic Freycinet Peninsula and Coles Bay which abounds with lovely walking tracks such as the classic Wineglass Bay walk, either to the Lookout which gives spectacular vistas down to the perfect arc of white sand, or down to the beach itself, and for those looking for more than a ramble, the slightly longer Hazards Circuit around the granite mountains.