Head to the highlands of Tasmania to find wombats hiding in the button grass moorlands, eagles soaring overhead and 'kangaroos' that could fit in the palm of your hand. Wander around thousands of deep lakes, swim and fish; explore the Lake St Clair-Cradle Mountain National Park, and breathe in the alpine air on your unforgettable wildlife adventure.

Cradle Mountain in Tasmania’s north-west might be one of the most photographed and visited places in the state, but the vast area surrounding it that makes up the Central Highlands, Great Western Tiers and remote Central Plateau attracts a fraction of the tourists and yet reveals beauty and wilderness in spades; this is a walker’s paradise.

Also known as The Land of Three Thousand Lakes, the region is home to Australia’s deepest freshwater lake, Lake St Clair, and one of Australia’s largest freshwater lakes, The Great Lake, as well as the raw wilderness of the World Heritage-listed Walls of Jerusalem National Park. This area doesn’t fit an easy description. Nor does it fit into any straightforward weather map – here, more than anywhere else in Tasmania, are you likely to witness four seasons in one day. Watch Willem Dafoe in the hauntingly wonderful film The Hunter, based on Juliet Leigh’s novel, for a clear indication of what you might expect.

The Central Highlands and Central Plateau is home to two of Australia’s most remarkable wilderness lodges. In the south, Pumphouse Point provides accommodation in the restored hydroelectric pump House, literally in the middle of Lake St Clair. Thousand Lakes Lodge, in the northern Central Plateau, was once used for training Antarctic expeditions, so remote and wild is the surrounding ‘moonscape’.

For an even more personal touch, stay on a charming homestead and sheep farm surrounded by rolling hills in the Southern Central Highlands, and a remote eco B&B/lodge with gourmet cooking on the edge of ancient rainforest in the Great Western Tiers, a walkers' paradise.

Keen walkers are well-advised to take advantage of one of our superb walking guides to make the most of their time here. Weather can change at speed and nothing can match the knowledge gleaned over decades by local experts.

One of the most surprising and remarkable tourist attractions in the Central Highlands, apart from the scenery, is the Wall in the Wilderness at Derwent Bridge. This magnificent, giant wooden sculpture by artist Greg Duncan tells the story of the region’s history from the indigenous people to the Tasmanian Tiger and the hydroelectric workers.  The Wall in the Wilderness is planned to be 100 metres in length at its completion and should be on everyone’s list to visit.

Tasmania's brimming trout waters are found here, dominated by naturally spawned brown trout, though wild rainbows are common enough. The wily nature of the trout, the confusing diversity of the waters and the variability of the weather has led to a reputation of demanding trout fishing.

Many visitors, unless they are specifically in Tasmania to fish or to walk (notably for the world-famous 65 km Overland Track) will miss out on most of the Central Highlands unless they take the time to stop on the long drive between Hobart and Strahan, or take the road less travelled; The Highland Lakes Road.

Featuring an old-growth rainforest and alpine heaths, the national park is home to the world-famous Overland Track, leading adventures to the majestic Lake St Clair, the deepest lake in Australia, and iconic Cradle Mountain. 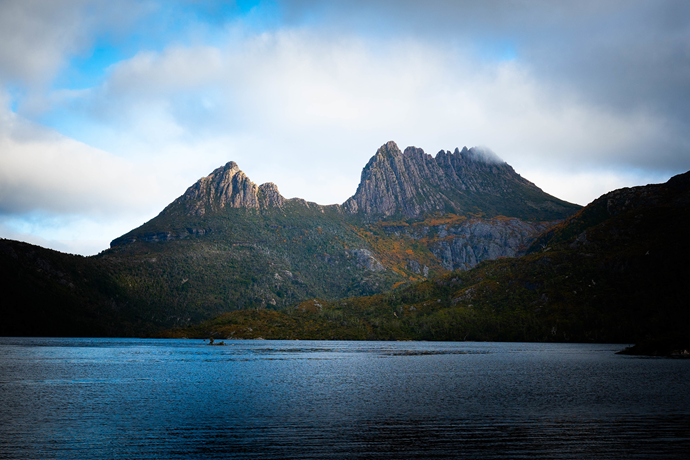 The Walls of Jerusalem National Park are located in a remote area of the Tasmanian highlands and are a part of the Tasmanian Wilderness World Heritage area.  The area is a spectacular Labyrinth of alpine lakes and tarns, dolerite Peaks, ancient but fragile forests of Pencil Pines and unique alpine vegetation.